So, I thought I’d talk a little about the early history of the Dressmaking Pattern this week because, even through we are learning to make our own this month it is interesting and leads nicely in to tomorrows Tutorial all about scaling Historical and Vintage Patterns up.

Facsimile of the pattern pieces, Front instructions and Back instructions for Butterick pattern No.5688 (a skirt for an evening dress), circa 1919. Darts, stitching lines, etc. are indicated by perforations of different sizes and patterns (here represented as dots). From Wikipedia here.  Click on the images to enlarge.

Ebenezer Butterick’s Wife is widely credited as inspiring the first commercially graded- and therefore much more usable- Pattern. Until 1863 we had essentially been using Blocks which only came in one size and it was down to the skill and ‘eye’ of the home Dressmaker herself to scale up the pattern, then make any and all adjustments to fit necessary however; looking a little closer in to the history one stumbles upon Ellen Curtis Demorest who appears to have been a most remarkable woman!

Demorest had the same flash of inspiration Butterick did over ten years later: on witnessing her Maid cutting out a dress from wrapping paper she realised that she could mass-produce the idea of copied paper Patterns of fashionable garments for the home sewer. In 1860 Madam Demorest’s Mirror of Fashions, a Pattern Catalogue, was introduced and Demorest established what sounds like a wonderful company- employing both Black and White women workers as she was an ardent abolitionist (those offended by her politics were asked to ‘shop elsewhere’!!). Having devised a ‘mathematical system’ to print Patterns in various sizes, this was understandably popular and by 1865 Demorest had a small empire which ten years later was distributing over 3m Paper Patterns!

I was stunned to discover this and really wondered why the name Demerest was not well know today. It would appear that the Demorests’ did not Patent their idea but tailor Ebenezer Butterick- who started producing Mens and Childrens Paper Patterns in the mid-1860s but who had expanded into Womens Wear by 1867 and whose empire by 1974 was larger that the Demerests’- did, and Buttericks’ Patterns billed as “guaranteed to make a perfectly formed garment” remain one of the leaders in Paper Patterns today.

Don’t feel too sad for the Demerests’ though as it would appear that Butterick advanced the technology needed to truly mass produse Patterns. Initially folded by his wife and family and packed in boxes of 10 each, Butterick sold his patterns throughout New England. These patterns proved to be hugely popular, and Butterick could barely keep up. Finally Butterick invented a process, and a machine, that allowed him to cut stacks of paper patterns, which enabled him to produce his patterns in quantity and Butterick’s business grew to epic proportions. It’s reported that in less than a year he went from his humble tailor shop in Fitchburg, MA to opening the NYC office with The Butterick Publishing company producing nearly 6 million patterns a year.

James McCall, another tailor, started his company McCall’s patterns in 1870, with Vogue also in the picture by the 1890s and Pattern Companies had by this point started to sell Patterns in envelopes with directions. McCalls started printing cutting, marking and sewing lines on their patterns in 1921, which brings us slightly closer to the Paper Patterns we use today. Previous to this a Pattern included pre-cut but blank pieces of Pattern Tissue with numbers or letters punched in to them. A cutting diagram was included and from this one could ascertain which piece went where so I for one will always be forever greatrful to McCalls for starting the trend of printing information- such as the Grainline, number, quantity to cut etc- on the pieces!

During the 1910’s and 1920’s we start to see the rise of Ready to Wear Clothing which means home sewing starts to wane a little however; in America The Women’s Domestic Institute, is founded and soon led by Mary Brooks Picken, whose books are still an excellent resource today and can only have aided the production of Sewing Books from all the major Pattern Companies amongst others. I have the Womens Institute Underwear and Lingerie Book and it is just gorgeous!

In the 30’s The Depression hit America which gave rise to one of my favorite little snippets in Pattern History: the humble Grain Sack. Sewing doesn’t seem to have made the resurgence you would have expected during a time like this- unlike our most recent ‘Depression’- and it would appear that people simply made do with less however; Women did began to sew with feed or grain sacks- the colourful cloth sacks that held staples like Sugar, Grain and Flour. By 1939 this form of sewing was being promoted and companies start to print designs and projects on the sacks to be made at home. 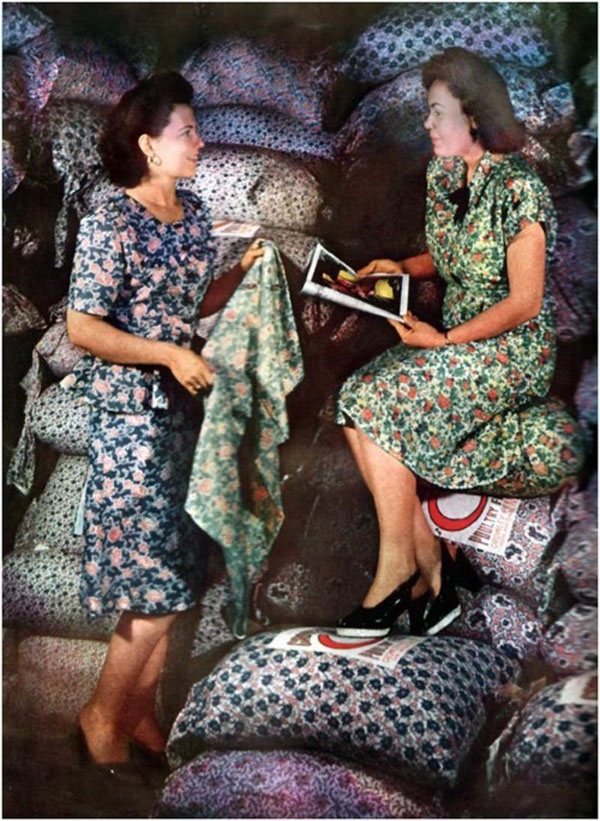 There are various, wonderful Blogs on-line which talk about all of this at much greater length, and more detail than I have done here however; I really love the feeling of rivalry and excitement which must have been palpable as these companies were being formed and discovering new ways of producing such a useful commodity  It’s not something you hear about too much these days but I think it is just as exciting as other moments in the Industrial Revolution!

You can read more about why it took so long to get around to designing Paper Patterns here, and there’s a great article over at Burda which talks a little more about the social history here. I also liked Sew Retro’s take on it all which can be read here. Delving through Wikipedia can also be rather interesting and their article on Demerest was a great read.

As I said, I shall be posting a tutorial on how to scale up Historical and Vintage Patterns from articles, magazines and books hopefully tomorrow. I am still a little wobbly from my tussle with the ‘flu! Please also watch out for the 2nd part of my Toile Tutorial where I shall be discussing fit and further Pattern adjustments to the Basic Block.

Finally, have you read last Fridays Pattern Making Musings yet? Head on over there now and comment to get your name in the hat to win an IN-HOUSE Pattern and get ready for this Fridays Musings with Sarai of Colette Patterns.

1 comments on “Snippets from Pattern History”